Deadly Dog Days Mystery #1 by Jamie M. Blair is an entertaining cozy mystery Kindle-book that I read for free with Amazon Prime. I am glad I did not read the "blurb" for the book because there are multiple storylines at work that go deeper than what is indicated. It is an excellent read with loads of fun, terrible in-laws, and decent outlaws. I look forward to reading the next in the series.

View all my reviews
Posted by Lori Latimer at 10:33:00 AM No comments:

Her Last Word by Mary Burton
My rating: 4 of 5 stars

Her Last Word by Mary Burton was a suspenseful mystery that held me in its grips until the end. The characters are well developed and the writing so good that I could visualize the characters and the setting for the story. I read it in one sitting and I liked it a lot.

View all my reviews
Posted by Lori Latimer at 4:22:00 PM No comments:

Why Kimba Saved the World by Meg Welch Dendler
My rating: 5 of 5 stars

I am a librarian ordering books for our "Arkansas Books" and sometimes it is a chore to locate Arkansas Authors.

It was a happy circumstance when I found Meg Welch Dendler and the book Why Kimba Saved the World: Cats in the Mirror Book 1.

We ordered several of these colorful and pure fun books. The covers are sturdy, easy to clean, and attractive. Easy to read.

I will continue to recommend Meg Welch Dendler books for Arkansas Juvenile Books.

View all my reviews

Moonstruck and Murderous is Done!

From the Blog of Blanche Day Manos; "Altogether, I’ve written seven cozy mysteries, although the seventh is not yet published. The first four were Darcy and Flora cozies. The protagonists are Flora Tucker, and her daughter Darcy Campbell. They live in Levi, a small northeastern town in Oklahoma. When Darcy returns home to Levi from Dallas, Texas, she expects to relax, enjoy puttering around with her mom and heal from the recent loss of her husband. Alas, this was not to be. Immediately, Darcy and Flora are plunged into finding out who murdered a lifelong friend and left his body on top of a brush pile at Goshen Cemetery. The Cemetery Club is the name of the group that keeps Goshen Cemetery running and it is an apt title for the mystery in which Darcy and Flora find themselves. Life doesn’t get any more peaceful in Grave Shift. Not one, but two Oklahoma earthquakes uncover a two-year-old mystery. The climax comes when Darcy meets the murderer face to face and finds out there’s more than one person in Levi determined to silence her for good. Best Left Buried leads Darcy into discovering some hidden things about her family’s past. She thought she knew all about her ancestry and knew quite a bit about the people who had lived in Levi all her life. An object hidden in an old well uncovers things that…well, that Darcy wonders might have been Best Left Buried. Flora thought that Darcy’s heritage was well-known, one that she could be proud of. Flora is upset when events occur that turn her long-held beliefs upside down. What will Darcy think? What can Flora do? She is handing her daughter a Grave Heritage but it’s one that Darcy wouldn’t change for the world. In the Ned McNeil moonlight series, Ned inherits a Victorian house, replete with a shady history and more than one mystery. Strange to say, the full moon shining down on Granger Mansion (the name the town’s people have given her house) seems to have something to do with mystifying discoveries. Moonlight Can Be Murder but it can also light the way to a new and exciting life for Ned. By the Fright of the Silvery Moon involves new friends, a new job for Ned, and a few secrets contained within her old house. Strange things happen, all connected in some way to an old-time outlaw whose mother may have been the first owner of her house. And, the culprit? Well, it’s someone Ned would never have suspected–not in a million years! The moon continues to play a vital role in the mysteries of Granger Mansion and in the soon-to-be-published third book. Ned’s friend Pat, who as you remember, is somewhat superstitious, is convinced that the blue moon which occurs in this fractious month, is what’s behind all those unexplained murders. The only logical answer, Pat declares, is that the people at the Carver estate are moonstruck. Moonstruck and Murderous! 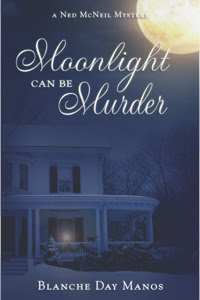 Maps Mania: A Map of all the Books

Maps Mania: A Map of all the Books: The HathiTrust Digital Map is an interactive map which allows you to browse and explore the 14 million volumes in the HaithTrust's rep...
Posted by Lori Latimer at 1:58:00 PM No comments: